Popularize The Use of Flame Retardants to Reduce Fire Hazards

It is understood that, with the development of society, a variety of synthetic materials, polymer materials proliferate. These materials are very convenient to use, but the Achilles heel is easy to burn. Putting flame retardants inside these materials can slow down the burning rate of the materials. In the event of a fire, it can make personnel have more time to escape, allowing firefighters to quickly put out the fire.

Flame retardants in furniture are seen as a good way to prevent fires, but multiple studies on animals and humans have shown that household items containing flame retardants gradually release toxic chemicals, especially when there is a rupture, which can be “ejected” into the dust or inhaled into the lungs, causing hormonal imbalances and affecting brain development, especially in pregnant women. Pregnant women, if overexposed, can directly lead to low birth weight, low IQ and impaired behavior of newborn babies. Adding flame retardants to prevent fires is well-intentioned, but it is not expected to become a chronic poison. 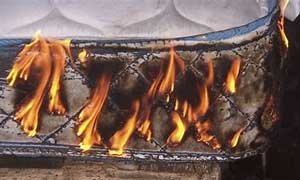 Harmful flame retardants mainly refers to two chemicals: one is trimethylolaminomethane, a chlorine-containing carcinogenic flame retardants, due to its potential health risks, as early as 1977 has been strictly prohibited for infant and child clothing, but in sofas and other furniture is still no specific provisions; the other is pentabromobiphenyl ether. These flame retardants are often added to furniture, as well as computers, televisions, telephones and other electronic apparatus shells, used to fire.

However, the boss of a flame retardant company revealed to reporters that even in the case where the regulations have been promulgated, the products of the relevant domestic enterprises can meet the standards are very few. For domestic sales of products in the domestic market, enterprises do not care whether there is no standard. “Technology is not the problem, the key is the cost. Polypropylene, for example, is used more in decoration and upholstery, and its raw material price is 8,000 to 10,000 yuan per ton, while the price of flame retardants is usually about 20,000 yuan per ton. According to the regulations, the proportion of flame retardants added to 10% to 15%. In other words, if flame retardants are to be added, the cost of each ton of polypropylene will increase by 2,000 to 3,000 yuan.”

The use of flame retardants makes sense for the whole environmental situation in China, from the level of saving lives of some manufacturers, many of whom are manufacturers supplying construction materials. They generally feel relatively unfamiliar with flame retardants and have no sense of urgency to add them. Or some companies know about it, but do not feel the need to add it.

Adding flame retardants to prevent fires is well-intentioned, but if the flame retardant is harmful to humans, it may be harmful to health. Numerous studies have proven that brominated flame retardants can seep into the environment and accumulate over time in living organisms, disrupting endocrine activity, affecting the regulation of thyroid function, causing hormonal imbalance, and affecting brain development, especially if pregnant women are overexposed, which can directly lead to low birth weight, low IQ and impaired behavior in newborn babies.

Because California passed a law 30 years ago requiring the heavy use of flame retardants for fire protection, the standards for BDE use are much higher than in the rest of the United States. The levels of flame retardants detected in furniture in California housing were 10 times higher than in housing in the rest of the United States and 200 times higher than in European housing. The scientific community’s concern about the health effects of brominated flame retardants first came from a study that followed POPs in the breast milk of Swedish mothers, whose breast milk has been on an increasing trend for PBDEs since the 1970s. In addition, the blood levels of brominated diphenyl ethers in California infants were generally higher than those of their mothers.

1. GB28481-2012, a new standard for harmful substances for plastic furniture, was introduced in 2012 and has been officially implemented since July 2013. The standard for the use of polybrominated biphenyls and polybrominated diphenyl ethers, the two categories of brominated flame retardants, gives specific limit indicators: per kilogram added shall not exceed 1000 mg;

In order to cooperate with the implementation of this mandatory national standard, the Fire Bureau of the Ministry of Public Security also formulated the “flame retardant products logo management approach”, which was officially implemented on May 1, 2007. July 1, 2008, China officially implemented the fire retardant logo express management system in public places. The system requires that new or altered public places, must be used to meet the mandatory national standard GB20286-2006 flame retardant products.

IRO Coating always supplies high-quality Flame Retardants. They are included but not limited to TCPE, Diethyl Ethylphosphonate, DMMP, and TCPP.

You Will Get Our Reply Within 24 Hours!